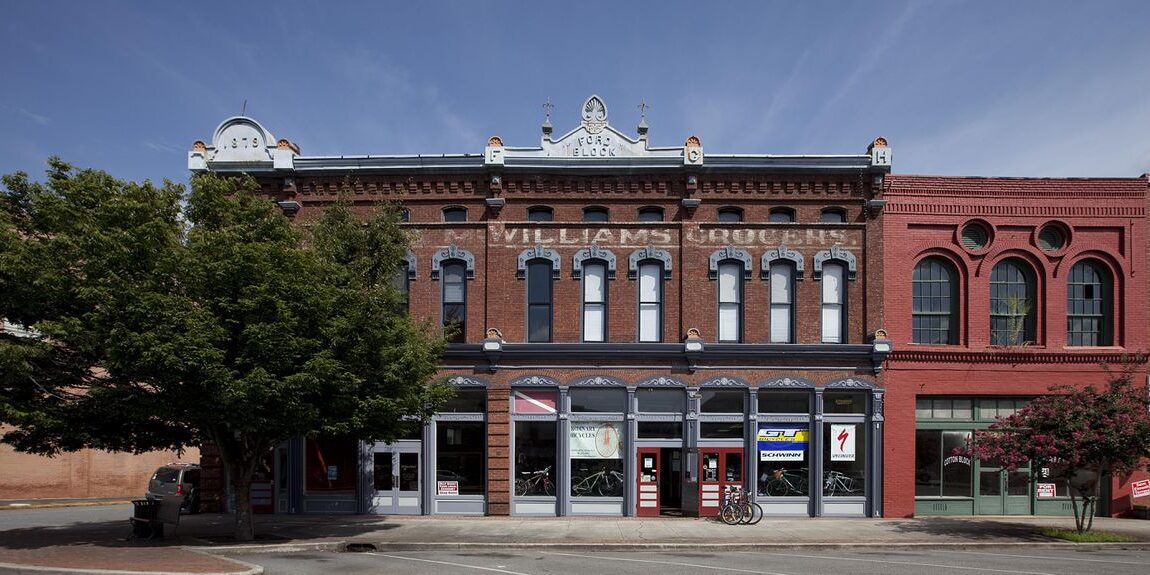 The controversy over syndicated conservation easements tax shelters has raised its ugly head in the Congressional race in the 14th District in Georgia. Barring a blue wave miracle, representation of the district in Congress will be effectively determined in a Republican primary runoff on August 11.

The runoff candidates for the nomination for the seat made vacant by the retirement of Tom Graves are construction executive Marjorie Taylor Greene and neurosurgeon John Cowan.

Marjorie Greene’s campaign issued a statement condemning her opponent for his connection to the syndicated conservation easement industry.

“I’ve never been fond of rats, snakes, and swamp creatures… or liars. My opponent John Cowan is propped up and funded by the good ‘ole boy corrupt Rome swamp that is desperate for special favors and get out of jail free cards. Rome, Ga is plagued by a massive corrupt abusive tax shelter scam currently being investigated by the IRS and the DOJ.

Rome, Georgia is named the epicenter in the entire United States because of a greedy cabal that will do anything to maintain power and continue their illegal abuse of syndicated conservation easements in order to get filthy rich. John Cowan’s inner circle, heavy supporters and big donors are Webb Creek President Ronnie Wallace, Webb Creek CEO Bryan Kelley, and many other people in Rome who are invested in this secretive dirty scam.”

The statement goes on finishing with:

“John Cowan only cares about slithering his way up to the big swamp in DC to join the other swamp creature and play the same age old game of greedy corruption all for power and money. The people won’t stand for this on August 11th! Vote Marjorie Taylor Greene to drain the swamp!”

Messages I left for an official of the Cowan campaign for a response were not returned.

Ms. Greene finished first in the primary with 40.3% of the vote and is favored to win the runoff. She is not, however, the favorite of high-ranking Republicans in the House thanks to videos that have surfaced in which she expresses views that they find embarrassing.

On Muslims elected to offices:

“They want to put their hand on the Quran when they are sworn in. No, you have to be sworn in on the Bible.” (Apparently not true. Who knew?)

On who really has problems:

She has also been tagged as a QAnon believer. If you don’t know about QAnon, I am going to have to ask you to look it up. Young Earth Creationists and sovereign citizens have exhausted my patience with right-wing tomfoolery.

John Cowan is in the runoff by virtue of coming in second in a field of six with 21 % of the vote. According to his website he is Pro Trump, Pro Life and Pro Gun and is ready to “fight against any efforts by the left to rebrand socialism, undermine our Constitution or threaten our freedoms”.

Of the twelve counties in the 14th district, Cowan only carried his home county of Floyd, where the city of Rome is located. Rome GA is at the heart of what is referred to as the ABC Triangle (The triangles points are Atlanta, Birmingham and Chattanooga).

Based on reports about the first debate, the campaign is on the bitter side, with each candidate seeking to establish ways in which their opponent is insufficiently zealous in being Pro Trump and seeking other things to embarrass one another. That is what brings us to syndicated conservation easements.

If you own property and jumping through the proper hoops contribute an easement giving away your rights to change the property in one way or another to a qualified organization, you can take a federal income tax deduction for the value of that easement. Since there is not a lot of market for easements you generally value them based on the difference between the before easement and after easement value of the property.

What has happened is that promoters have latched onto the idea that the “before value” does not have to be supported by the current market. This allows them to acquire a property for say $1 million, shortly sell it to an investor group for say $2 and then have the investor group in a matter of days donate an easement on the property that is valued at say $10 million.

Everybody is a winner and it helps the environment. What is not to like? Well the IRS, DOJ and Senator Chuck Grassley, the chairman of the powerful Senate Fiance Committee, all have problems with having say $3 million in tax revenue go to create an easement on a million dollar property.

There is a major effort being made to stomp out the industry which is supported by those in favor of preserving conservation easements as a legitimate tool. I have a lot of coverage on the issue, but you might want to check out – Syndicated Conservation Easements – An Industry Based On Nonsense.

But how does this all become an issue in a congressional race?

The 14th District is in Northwest Georgia and consists of twelve counties (it shares one county with the 9th district). The biggest city in the district is Rome in Floyd county, which is kind of centrally located being about an hour and half from Atlanta and Chattanooga and two hours from Birmingham.

The Rome Georgia Metropolitan Statistical Area, which is coextensive with Floyd County, with an estimated 2019 population of 98,498, ranks 360th among the nation’s 384 MSAs.

My sources about Rome are generally off the record. The picture they paint is one of a once thriving manufacturing center. Long history on that – Rome is one of the first places that Sherman burned as he made “a thoroughfare for freedom and her train” . NAFTA might have been worse for industry in Rome than Sherman was.

Rome is now known as a medical center which may have helped get its other major industry. I got my start in affordable housing shelters because Joseph B Cohan and Associates had a lot of dentists as a clients. So it may be that high earning physicians needing tax shelters helped boost Rome’s syndication industry.

Prosperity came to Rome, at least for some, thanks to syndicated conservation easements. Although the idea may have originated elsewhere, it was raised to a level of high art in Rome, allowing their fellow Georgians to claim 36% of the deductions for conservation easements nationally in the period 2010-2012 according to a Brookings Institution report.

They have started spreading the wealth. I have heard from people in Brooklyn and California who were offered deals. The conservation benefits are also spreading to other nearby states, but the brains seem to all be in Rome and Atlanta.

The Cowan Connection To Syndication Easements

Included among Cowan’s contributors is Bryan Kelley who was a figure named in the Senate Committee’s investigation into “potential abuse of syndicated conservation easement transactions”. Kelley is the CEO of Rome based Webb Creek, which is identified by Bloomberg as a promoter of conservation syndication.

Representatives of Webb Creek and MSP had no comment for this story.

I have reports that people in Rome hesitate to criticize the conservation syndication business out of fear of being ostracized. There are also reports that economic development in Floyd county is hampered by the sheer volume of conservation easements.

Last year Doug Walker reported in the Rome News-Tribune on the Rome-Floyd Development Authority’s hunt for parcels available to attract industrial development to the region.

“Rome Mayor Bill Collins, one of the constitutional members of the Rome-Floyd County Development Authority, said there is virtually no land left inside the city limits of Rome for industrial growth, and the proliferation of land that has been put into conservation use valuations, a state program, or the federal conservation easement program in the unincorporated areas of Floyd County has made it tough to find large parcels.”

“Development Authority Chairman Jimmy Byars said the community is just one deal away from not having anything of any size to show a prospect. The largest tract currently available is the 100-plus acre site at the intersection of Ga. 53 and Ga. 140 about 10 miles northeast of Rome.”

On the intimidation side, one community leader, discussing the conservation easement syndication industry, told me:

“I do believe that there are well-to-do Romans within the power structure of the community and people are reluctant to go on the record in opposition for fear of retaliation.”

The picture that has been painted for me is that most voters in the district are red meat Trump supporters, but around Rome there are more elite country club Republicans. Ms. Greene moved into the district after having started a race in the 6th District which is less promising for a conservative. Both candidates are vociferous in their support of the President.

I have been unsuccessful in my attempts to get a reaction from the Cowan campaign. One of the people that I spoke to in trying to find a source told me that she wished Marjorie Greene who does not have a good word to say about Rome would “get her ___ back to the 6th District”.

I asked the Greene campaign whether Ms. Greene supports an increase in IRS enforcement resources to deal with easement syndication and other abusive shelters. The official response was:

“I support uprooting corruption and abuse wherever it exists. The IRS already has plenty of our cash. They should just do their job.”

Maggie Chambers, Communications Director of the Democratic Party of Georgia wrote me:

“GA-14’s GOP primary has turned into two millionaires throwing corruption charges at each other instead of fighting for their constituents. This ugly infighting among ethically challenged, extreme candidates is exactly what’s wrong with today’s Republican Party.”

I heard from the campaign of Democratic candidate Kevin Van Ausdal. Kevin wants to bring civility back and is more interested in bringing people together.

To be fair, they were not syndicated deals like the ones coming out of Rome.

A Pair Of Education Tax Credits That Help Ease The Expense
July 31, 2020